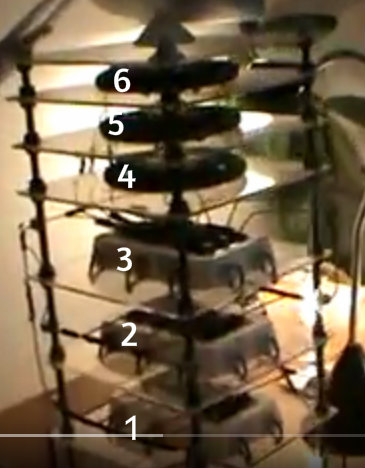 He is connected since mid-october (2 months)

Generally all copper elements are cleaned by the torch and 3x nanocaoted with caustic solution. The supporting structure is also nano-coated.

Die idea was to create the constellation of the GaNSes in a way so the plasmic Energy rises from the bottom to the top (from the CUO to the CH3).

They are connected to the exit of the Magrav. It is preferable to take the switch out of the power bar, because it has a tendency to prevent the nano-coating downstream; and it contains oftentimes a fuse which may be too low for us 😉
On this power bar are plugged non-inductive resistances with a combined value of 124W (ventilators and LEDs); he added a heating ventilator adding another 1000W (first speed), giving a total of 1124W.

He installed a watt-meter at the entrance of the magrav which showed a use of 12W which signifies an economy of 99.99%! Still more surprising, the readings of the amperage show 0 as do the readings of the tension! According to Ohm’s Law we should have a reading of 0.054A with 220V… 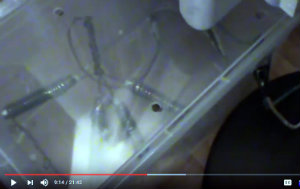 On another wall outlet in the same room he plugged an array of 4 simple capacitors in parallel between the phase and the neutral. He confirmes that the economies really happened after the installation of this capacitor bank. 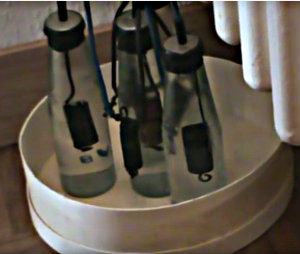 The ring of exterior bottles contain the 3 standard GaNSes: CuO-CO2-CH3with a little bit of alcalinity; the center bottle has LP-Pb with a little acidity.

He installed another LP-Magrav not far from the first one; but inversing the pH values: alcalinity in the periphery bottles and acidity in the center bottle – again to create a plasma gradient.

What may happen next

He expects to disconnect the magrav from the wall outlet in the near future; leaving only the ground connection.