What is the difference between graphene and nano coating? 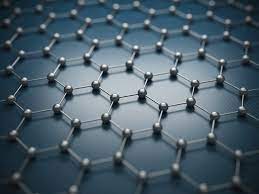 According to wikipedia: Graphene is an allotrope (specific shape) of carbon consisting of a single layer of atoms arranged in a two-dimensional honeycomb lattice. Graphene conducts heat and electricity very efficiently along its plane. The material strongly absorbs light of all visible wavelengths, which accounts for the black colour of graphite; yet a single graphene sheet is nearly transparent because of its extreme thinness. The material is also about 100 times stronger than would be the strongest steel of the same thickness.

In fact we are created out of nano structured gas in the shape of graphene. In our skin, teeth and our nails for example the carbon is in a nano-structure.

The KF was the first to be able to produce graphene of carbon in the nano structures of the coca-cola bottle experiments.

When we nano coat any material, we so to say isolate individual atoms from the molecular lattice of the surface of the given material; then we charge it with magnetic fields and it stays mono-atomic, with no dimension because it is in the plasma state.

When we then use the nano coated material to produce GaNS, the field interaction of the two plates attract plasmatic carbon from the atmosphere. And as soon as this carbon plasma enters the salt water, it combines itself immediately with the plasmatic oxygen in the water and converts into molecular GaNS – GaNS-CO2 for example.

The GaNS produced is the energy form of CO2; it is not graphene, which is a matter state structure.

Nota bene: when you read about graphene in the vaccines for the corona virus and nano particles and so on… these are all complicated words signifying nothing. For conventional science it is very difficult to produce graphene. They can claim a lot but there is a long way between claiming anything and actually being able to make it in reality. It is simple: the powers to be use fear to control people; they don’t need to make what they claim, they only have to make people afraid by complicated words.

The phenomenon of your body becoming magnetic after vaccination, that metallic parts are sticking to your skin, comes from the process of injecting any chemical substances (pain killers, vaccines or anything else) in your body: they change from the matter into the plasma state as soon as they enter under your skin. There the interaction with other plasmas of the body – especially the iron core of our blood – can create strong magnetic fields, which can produce subsequently the magnetic attraction on the matter level.

By the way: “If you can introduce the graphene of carbon via an injection into the body, you give the body the most beautiful thing: this injection will eradicate immediately most of the illnesses your body can have! But (unfortunately) they haven’t be able to do that! It’s only because some people have found a way of how to frighten you – understand the Science!” MT KESHE

Remember that the GaNS-CO2, according to spectral analysis, contains all the elements of our earthly universe – it therefore can connect to all elements and bring back their balance!

Want some more? All ecologists agree that global warming is caused by CO2. That may very well be true in regards to matter state CO2,, but the whole scenario changes when we work with GaNS-CO2.. Already the production of GaNS-CO2 contributes greatly to the reduction of matter state CO2 and thus reduces the green house effect. Now we see that the same CO2 is responsible for the damage and for the repair as well! One is killing the planet and the other produced by conversion into the plasma state is healing the planet!

GaNS is a tool of eternity

We have learned that each tiny GaNS particle is like a miniature sun. It is in constant interaction with other entities of the universe; interaction means reciprocity of giving and taking. This condition makes GaNS eternal.

Now GaNSes exist, like everything else, like us simultaneously on the matter level and the fundamental level. On the matter level they can seem to disappear, but their fields cannot. The KF has observed for example that the GaNS applied in reactors that have been placed in disaster areas, that the GaNS in the reactors diminished over the time of days. Is has been explained that the GaNS had been used because there were a lot of people in considerable stress and need. In the same logic, you could drink liquid plasma containing particles of GaNS and your drinking would diminish the amount of GaNS particles in the bottle. If we take a step back and observe what is happening wouldn’t we see that the GaNS has only moved from on spot to the other – that means the overall GaNS quantity in the universe wouldn’t be diminished.

“If you put GaNSes into a house with people having big emotional problems, the GaNS will diminish but the people will change.” MT Keshe

In this way the spraying of Zn based GaNS over a large city for example will have the effect to lower the potential of aggressiveness (violent protests for example). This technique does not work in the sense of “mind control” – like putting large amounts of fluorine into the drinking water in order to anaesthetize people into more obedience. This technology works by satisfying the emotions of the people; then they still can be against regulations they find unjust, but with a much clearer mind and without being taken to violence, using the protest as a emotional pressure relief valve.

On another level GaNS like any other element in the universe is refreshed at a rate of 1017x/s – always to the norm. That is specially true because we humans, with our right now not so structured consciousness, have no active part in it. And the basic effect of GaNS is giving the equilibrium back to any systems that have lost their balance – be it in the environment or in our body, on the macro- or on the micro-level. That means that GaNSes are energies that cannot do wrong, they can only help restoring systems and functions back to the norm. And eternity is where everything is to the norm.

Can we use plasma technology to prevent and cure the destructive fires occurring every summer ?

The answer on this questions depends on the character of the fire, whether it is man-made or it is part of a natural cycle like volcanic eruption and earth quakes. We can argue that we as humans should not interfere with natural processes. Large forest fires in the wake of long droughts are part of the way how nature takes care of her environments.

On the other hand natural catastrophes are not to the norm, they are not part of the Good for All because people, animals and plants die in the process.

There is a team of Iranian Plasma scientists who is working to develop a technology to cope with this.

If we think a little further about the involvement of us humans in perceived natural events. We can for example understand that wars are the manifestation of persistent uniform aggressive thoughts fuelled by our collective unconscious. Could the same aggressive thoughts not also be responsible for what we call “natural” catastrophes? We are made in the image of the Creator and participate since the beginning as co-creators.

When we work with a structured mind, we want and to exactly what the Creator wants; but if we come from the unstructured mind, don’t we collectively fuel our thought energy into catastrophes?

To counteract this fallacy, there is a whole set of evolutionary technologies provided by the Science of Eden to prevent global and local catastrophes – for example all the provisional techniques to control the present via influencing the future.

How can we produce the GaNS of oxygen?

It is similar to the production of the GaNS of iron. It’s very difficult to do it directly but much easier to make the GaNS of iron in conjunction with another material. We know the opposite way: with the amino acids floating on top of the GaNS production in the presence of a rusty nail (FeO) we can produce blood.

Many people have produced the GaNS of iron by accident. They made a setup to produce the GaNS of deuterium; and what came out was a black sediment which reacted to a magnet: nano iron.

The oxygen is present on this planet in liquid or gaseous state. In order to produce the GaNS of oxygen we need to produce the magrav field of oxygen to attract the plasmatic oxygen like a magnet. To make it happen you have to know and consider the inertia of the planet.

Up to know nobody was yet able to produce the GaNS of oxygen. Maybe in the way of the Soul by influencing the inertia condition.

Any substance can exist on the plasma level in any position in space time and the inertia of the place – or the wish of our Soul – will decide on the condensation of the plasma into the matter state.

The salts in the Cup of Universe

Different salts create different inertia field forces. The conversion of plasma fields into the matter state and vice versa is done by the salts. Our body for example uses different salt conditions to transmute the unspecific energy packs into specific materials the body needs at certain places.

The same happens on the cellular level, amino acids in interaction with specific salinity will lead to the formation of different cells of our body: heart tissue, muscle tissue, skin tissue etc.