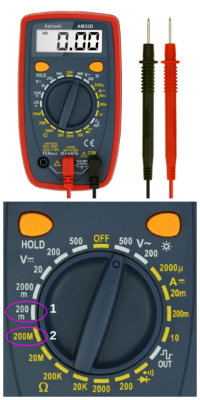 The nano-layers show remarkable features that can be checked with a multi-meter. To do this, place the multi-meter terminals as gently as possible on the nano plated object so as not to damage the nano layers.

To measure the resistance, select the largest scale in the Ohm range: 200M = 200 Mega-Ohm.

The quality of the nano plating can be checked in two ways: you should detect a fluctuating voltage and a resistance that is greater than 1M Ohm. Here is how you do it:

This means that the nano layers have an almost infinite resistance against an electric current. Since the resistance is inversely proportional to the conductivity, we can say that a piece of nano plated copper conducts practically no electricity.

The mystery for Mr. Ohm

Ohm’s law describes the relationship between voltage, current and resistance in an electrical circuit. 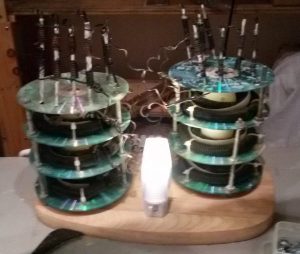 The above formula means:

Example note: A magrav is connected to the 120VAC wall plug. The coils resistance show a resistance of 1,500,000 Ohm.

According to Ohm’s law:

Such a current is too low to light a lamp… but… oh miracle – the bulb lights up!