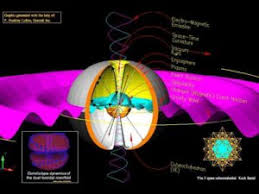 Albert Einstein and Stephen Hawking have spent their lives searching for a Unified Field Theory. They felt that the World is not an agglomeration of separate entities but an organic whole just like a living being. So they wanted to find what holds our world together; they wanted to find a system that explains the world from the largest (planets) to the world of the smallest (atoms).

Plasma Science teaches us that the Plasma is both at the bottom or at the centre of everything. Not only at the centre of all individual things (protons, neutrons and electrons), but also at the centre of composite things (molecules, cells, beings, galaxies…) that hold a collective Soul… It is important to know that the force of the Plasma at the centre of an animal, me, the Sun etc. – all have the same force. That is to say, the soul in me, in you and the neighbour’s dog… is always the same. This naturally leads us to the conclusion: if all souls are the same – then there is only one soul. And each “individual” soul is only one aspect of the Creator’s Soul. Thus we give our particular flavor or colour to the Collective Soul

Plasma does not work like a car whose performance increases when you inject more fuel, when you do something – plasma is controlled by the flow of desires: the more you desire, the more it gives you. This also means that the same plasma or GaNS does not work equally with each person: each individual soul who makes it gives it his personal touch and also each ‘user’ with a different need, will therefore ask the plasma tool for something different.

Plasma works in a personalized way.

in 2016 already 1.5M+ people were working using plasma technology – everyone gives his personal touch to the product he creates. We can understand this even more deeply by remembering that at the centre of each entity, be it a mineral or a living being, there is a plasma, there is a soul. This knowledge leads us to realize that by qualifying one ‘thing’ as living and the other as not is arbitrary, without any real reason. If everything has a living soul deep inside it – then how can we describe a stone as non-living?

Following the same logic: every plasma tool we create is above all a living being! A plasma tool is not a gadget or a pill, but rather a friend who comes to help us…

The vast unlimited ocean of God’s creative space is transparent like a crystal. Yet it is filled with vibrations overflowing with energy. This energy is known as the ethereal substance. All possible elements are dissolved in it, ready to answer the call of the vibratory regime that will allow them to condense into matter. The human being, cooperating with the Whole, can, through his thoughts, set in motion the appropriate vibrations. Then the element, having no other way out, rushes to fill the mould formed by desire. This is the absolute law, the repercussions of which no one can stop… Man is the only projector, the exclusive coordinator of the various moulds of the substance.