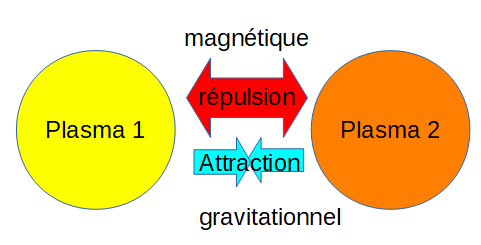 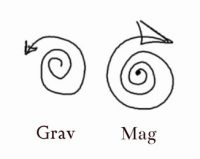 GaNS can also be magnetic or gravitational. All GaNS that contain oxygen (O), such as CuO, CO2, ZnO, are takers, gravitational and alkaline. GaNS-CH3 is a donor, magnetic, acidic.

Everything in the universe is made of magrav fields and their interactions. The atoms, our body, the whole universe and made of these fields. The fields are dynamic, i.e. they are in perpetual motion; they constantly interact with each other.

The existence and interaction of dynamic fields with their strength, velocity, density and magnetic field leads to the creation of everything we see – planets, galaxies, plants, animals, molecules, atoms, us…

To better understand Plasma, we can imagine it as a sphere or a spiral. Each round of the spiral can be compared to a layer of a sphere, like the layers of an onion, but they are all linked and thus form a 3D spiral.

On the periphery of the spiral or the outer layer of the sphere the field forces are the weakest; the closer you get to the centre, the stronger the fields become. 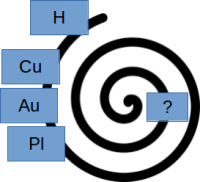 If, for example, chemical elements are placed on the Plasma spiral (image on the right), we see that the light elements will be at the beginning and the more we move towards the centre, the heavier the elements we see. This gives the following sequence:

After the material elements come the frequencies of visible light, followed by invisible frequencies such as X-rays etc. We see that already on the second layer, which is just below the surface layer of the sphere, there is no more matter, no more tangibility.

There is a difference between magnetic fields and plasma: magnetic fields – such as radio waves – are emitted and propagated in space; they are directional and do not return to the source.

The plasma that spreads and is not absorbed along the way returns to its source. The plasma that interacts on its way begins to exchange (give and receive) with the other entities. This reciprocal exchange is responsible for the fact that the energy of plasma does not run out.

This explains why the sun does not age, it does not exhaust itself; it accepts, absorbs, retains, consolidates, then gives. It perpetually receives and absorbs in itself the equivalent of what it emits: regeneration and rebirth therefore continue infinitely.