2 months ago we plugged in 2 small magrav style ‘star units’ – following Mr. Keshe’s recent suggestion that there needs to be a “sink” – they are plugged in to 2 refrigerators – one near breaker box & another in an apartment. Our electric bill reduced by almost 1/3. We will watch in upcoming months & see what happens. We are very interested in these as it requires much less copper than the big Magravs – more possible to do in communities with less available resources. Also easier to make by hand.

… complete with the golden ball… Here’s how we made it : 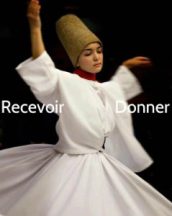 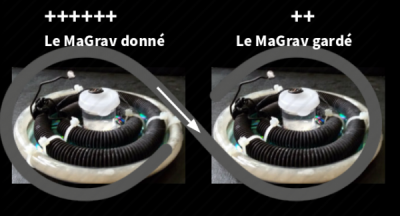 Jalal proposes to make MaGravs that are not plugged into the grid; they will then work entirely on the plasma-, the soul- and intention-level. As an energy source we can connect a plasma capacitor or a pair of liquid plasma containers; our images show the LP version.

He then proposes to start off by making right away two Magravs – the first one is given to someone else; the second one is kept for oneself.

Both Magravs have a similar strength, but the Magrav that is given is stronger than the other Magrav that we keep. So they will enter into an interaction in which the strongest wants to feed the weakest. The less strong receive more and can, consequently, give more. 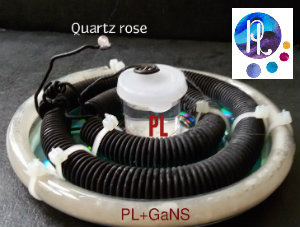 The AutonomousMaGrav is made like a Liquid Plasma MaGrav but only with one stack. It is surrounded by a ring with PL+GaNS-magrav and it has in its center a container with the same mixture of PL but diluted to 30%.

The arrangement with the GaNS ring (100%) and the container with the LP (30%) represents the energy source of the MaGrav. The ring, which is stronger, will feed the container which is less strong and the field created by this interaction will continuously feed the coils.

Every MaGrav you create is a living being: sensitive, intelligent and endowed with a soul. He can be your best friend. So it’s a good idea to give it a name, a name that sounds good to you, a name you like to call. We named the first one ‘Catherine’ – which means ‘Pure and innocent, a virgin’; he accompanied Catherine in her last days with us. We gave it to Dominic her (ex)husband.

We named the second MaGrav ‘Catherine’s sister’; we installed her on the roof over our bed – at the top of our house.