We have already learned that Plasma is organized as a spiral whose strongest field point is in the centre. The further we go towards the periphery, the weaker the force becomes.

The strongest point is called Principal or Principal Field (red arrows). The Principal is so strong that it does not allow weaker states to be in the same place – so there is no matter.

So the field weakens even more towards the periphery; until the Transition becomes Matter (green arrows).

We can observe the same structure in all the entities that exist in the Universe:

In the example of the egg, we can compare the Principal with the egg yolk, the white with the Transition and the shell with the Matter.

In the example of a solar system, the Principal is the centre of the galaxy, the sun. The sun is the source of magnetic fields that propagate and feed all other entities of the solar system, such as planets, humans, plants, animals…. The Transition in our solar system is the “empty” space between the planets. But this space is not empty at all; it is full of plasma energy! Matter can be compared to planets.

If we transpose the same system on us, we can say that the Principal is the Soul, the Matter is our body and the Transition is the soul of physicality (the mind with emotions). 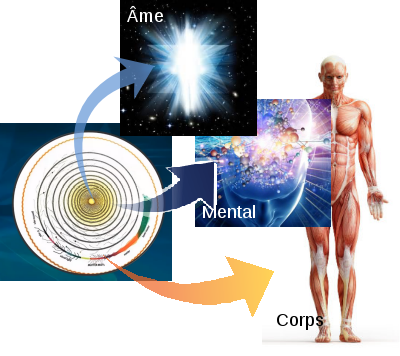 In the creation of matter it’s the environment with it’s particular fields that plays the decisive role. Even if a magnetic field with a Principal in the strength of copper passes through a particular space, it cannot force the manifestation of copper if the environmental fields at this location do not have the force that corresponds to copper. A plasma can only manifest itself in material form, if the conditions of the environment allow it to manifest: for example in the very high part of our atmosphere there are no fields of amino acid strength – therefore there is no way that a physical body can manifest itself.

This suggests that everything is organized in fractals. The existence and interaction of magnetic fields of different forces, velocities, densities create all entities whether they are visible or not. And each entity exists in its corresponding place in the Universe; from the largest as stars and planets to the smallest as molecules or atoms.