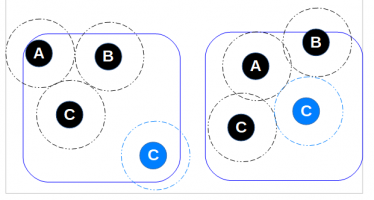 Round magnets are very suitable for observing the behaviour of plasma. When 3 magnets are placed on a flat surface, each of them will find its blanced position in relation to the other 2 (left part of the image).

If you approach another magnet into this constellation, the 3 others will naturally adjust in their position to restore balance (right part of the image).

What is the force that moves the magnets individually and allows them to position themselves?

Both magnets and plasmas generate gravitational and magnetic forces. Two forces of the same type repel each other and two forces of the different type attract each other. This explains the balance of magnetic and gravitational forces. The balance between attraction and repulsion determines the positioning. And the distance that is created between them, allows them to move freely at the same time. 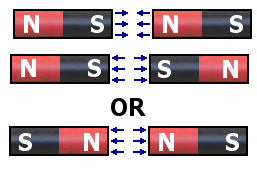 The whole universe is made up of plasmas that are dynamically organized by their gravitational and magnetic force. Balance is dynamic because celestial bodies are in perpetual motion; and their path draws the line of balance with all the other bodies with which they interact.

We observe the same play on the plane of atoms – the proton and the electron are also independent entities, each with its own fields. The electron maintains its balanced position with the proton by following an orbit around the proton at a certain distance. This distance on every spot of the orbit is proportional to the Magrav forces of the two entities; the stronger the respective fields, the greater the distance between them. This suggest that the perceived ‘solidity’ of objects is based on invisible Magrav forces; when we could change the charge of our finger, we could poke easily through a table top.
It is the same mechanism that is observed between the earth and the sun, the solar system and the galaxy, the galaxy and the universe, you and me…

We call this quest for balance between two entities, this perpetual movement between two plasmas: the Positioning of Plasma. The positioning is done continuously and perpetually because nothing in the Universe is static, stays in its place – everything moves all the time. This makes interactions and positions dynamic. It is not just one particular energy source – it is each plasma that maintains this dynamism. In these interactions, each plasma feeds the others and is fed by the others through the magnetic fields that come out and the gravitational fields that come in. 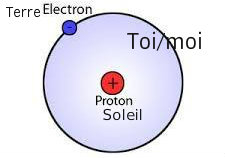 We observe in the nano plating process that the nano particles behave like plasma entities. The material particles of copper, for example, the copper atoms have a small charge, repel each other very little, so position themselves very close together. After their transformation into nano particles their charge increases. As a result there is more distance between them. Each nano particle has its own field that determines the position and distance to each other.