The Creation of Plasma

How is a plasma created? An individual plasma is formed by two magnetic rays from other plasmas, which interact together to form a new plasma.

We do not see these rays with the naked eye; we only see them when they slow down enough to collapse from the plasma state to the material state. All we see are only the peripheral layers of the plasma, where the energy is weakened enough that it appears as matter. In their center each proton or atom is a plasma. And it’s the same for the earth, the sun, the galaxy or the universe – there are only plasmas.

The interaction of gravitational and magnetic fields first creates the magnetosphere of an entity. This magnetosphere slows down through interaction with the plasmas around it to become matter. The shape and quality of the new entity is determined by the equilibrium point between the forces of the two magnetic and gravitational fields. The interaction between the different plasmas will always seek to establish a balance. For example, in our solar system, the different planets maintain their balance by following their orbits. It is clear that the galaxy is not static but dynamic, because equilibrium is established in perpetual motion. 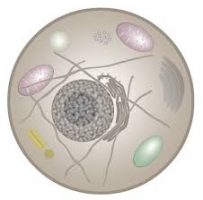 The same situation occurs in our body where the different cells, liquids, organs etc. are positioned according to a certain structure in relation to each other – which gives shape to our body. Same thing at the level of the cells (image on the right): the different parts that make up the cells (nuclei, mitochondria, etc.) are positioned in a balanced way and thus give the shape that we see.

This leads us to the conclusion that the world is organized into fractals: in each dimension, on each level we observe the same form of organization: fields with their interactions establishing a balance that gives it its appearance.

Each application of Plasma Science also “occupies” a certain “space” on the same spiral depending on whether it is more material (periphery) or more plasma (center):

1. The Health Antenna made with copper coils

4. Take-off and positioning with free plasma

The steps from the state of matter to the plasma state are also on the spiral: 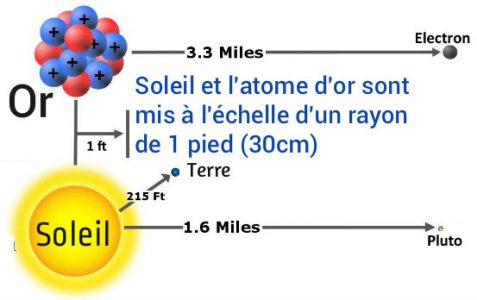 These steps are reversible, one can use free plasma to create matter or energy.

If we compare a gold atom to the sun by scaling the rays of both to 1ft (30cm), the electron will have a distance from the atomic nucleus of 3.3miles (5.3km). This distance is even double that between the sun and pluto.

It means that – even in an atom – there is much more space than matter. But this space is not empty at all – the “empty” spaces are “filled” with plasma fields. At the level of the largest, we observe the same phenomenon: in our solar system the “empty” space is filled with magnetic fields.