We have learned that plasma can be imagined as a spiral; like a spiral or a sphere it is like a sun that radiates. We have also learned that the plasmas position themselves in relation to other plasmas; and, once they have established their position, even if it is dynamic, they remain inside this ‘space’. On the other hand, the magnetic rays emitted from the N pole of the Plasma travel following a direction. These Magnetic Rays can be imagined as an arrow.

Like spiral plasma, the magnetic ray also has the 3 essential fields of a plasma: The Principal, the Transition and the Matter:

Then the magnetic ray looks more like a cylinder or a rocket than an arrow. Guided by its direction, the beam travels from one plasma to another.

The magnetic ray carries the same plasma properties as its source.

Let us look at all this in the example of our solar system: The sun is the Principal; magnetic rays represent the Transition field and planets and other entities represent Matter. We can say that the magnetic rays of the sun bind the planets to the sun.

The sun emits magnetic rays through its N pole. These rays travel from the sun to the periphery of our solar system. Some of the magnetic rays interact with other plasmas and the rays that are not assimilated during their journey by other entities of the solar system return to the source and return through the S pole to the Sun.

If we look at images of our solar system (left), we have the impression that there are many more empty spaces between material entities than there are materials. These “empty spaces” are only empty of matter; they are full of energy (right). In fact, there is no place in the Universe that is empty of plasma rays or fields. One could say that the Universe is composed of a few spaces filled with matter and many spaces filled with Plasma. All plasma fields interact with each other by magnetic rays. All rays have different strengths depending on their sources. 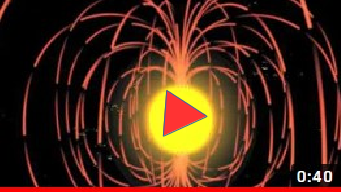 Once the magnetic rays leave their source, they carry the characteristics of the source but now they exist detached from the source from which they come. They remain in perpetual motion because they are dynamic. The set of all the rays with their interactions form the matrix, where all that is, is created. You can see that very well on the video about the birth of a plasma.

In his books, M.Keshe calls magnetic rays pmtics; it is an abbreviation of Plasmatic-magnetic fields. Plasma science and conventional physics recognize them as fundamental particles. They are the source of all material creation.