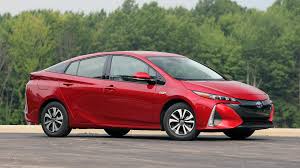 In February I rented a hybrid car, Prius Prime rechargeable. I installed a Magrav of the FabShop plugged into the rear cigarette lighter which goes off when the car is stopped. The car has two batteries; the lead battery is under the hood, and the Li-ion battery is under the trunk. When I bought it, I was doing 4.4l/km. Now I am at 2.8l/km after 8,000Km = 36% economy. A full 120V charge takes 5.5 hours and costs me $1.46 in electricity. I can also charge the Li-on on the 220V, which takes less than 2.5 hours to charge. I don’t have an instrument to measure the cost of charging on the 220V. My battery life is 44Km in summer and 35Km in cold weather.

It seems to me that we can connect a Magrav directly to the Li-on battery to get a longer range?

After reviewing my message, it gives the impression that Magrav is responsible for the results mentioned. I don’t think this is the case precisely because it is not connected to the main battery but only to the lead-acid battery, which has nothing to do with the car’s electric propulsion. At the most, the Magrav could contribute to make the car lighter. Hence the idea of connecting the Magrav to the large battery. I believe that the reduction in fuel consumption is rather the result of a smoother and more gradual driving style as advocated by Toyota…

I had a dream last night about this, I realized that the double Magrav built last year is plugged into circuit to charge the Prius all from the same workshop panel near the house. So when I charge the car, it undergoes (in a very good way) the effects of the double Magrav for 5.5 hours or 2.5 hours. Moreover, you have already told me that the Magravs in the same environment (in our country) communicate with each other. I have three, one single in the house, one double in the workshop and the third in the car. So here we are in the middle of a Magrav symphony in C major; a whole “harmony”. And Martha and I are also at the centre of this universe. WOW!!!!! Oh, my God, Martha’s pace maker is making jumps! Hihihihi.

This experiment has been done with a Chevrolet Aveo 2010. The manufacturer specifies a tank capacity of 45 litre and city mileage of 11.24km/l. Normally a full tank takes the car about 500km. You see on the dials that he has made 495.4 km and the tank is almost still half full.

This has been achieved by the power of intention without using any magrav or GaNS: when Hadil filled the car he had the pistol in one hand and he held the hose with the other hand. He imagined that he would fill the tank not with gasoline but with liquid love by focusing on positive thoughts and love in general, just generating feelings of love. As a result he has doubled the capacity of the tank.

With another car almost the same economies could be achieved by injecting 17ml of LP+GaNS-CO2 into the gasoline tank. He put additionally bottles with LP+GaNS of CO2, ZnO and CH3 in the trunk. 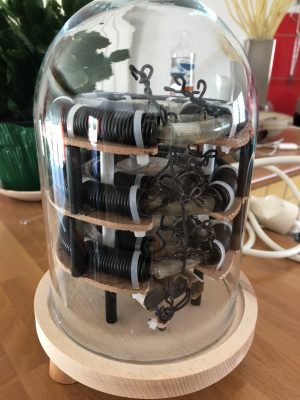 Our new MaGrav has been in the family for almost two months. He followed the various procedures, in accordance with the new recommendations of the Keshe Foundation. We designed it following the information given by Mr. Keshe.

Its main characteristics are as follows:

This is a first evolution that is very promising, the field measured by a dowser confirmed a range of 1500 km. The reduction in power consumption (secondary but appreciable result) is already significant. The readings below are based on the meter readings. 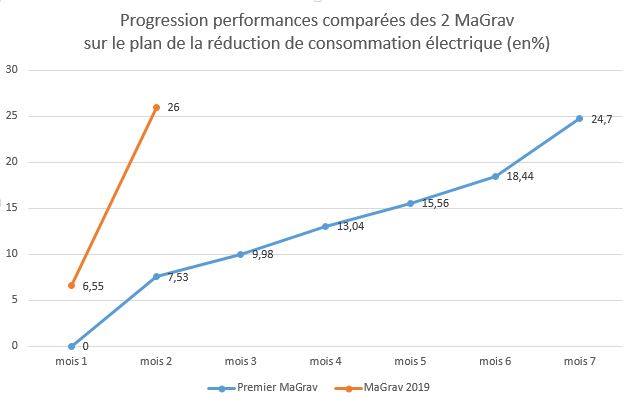 The growth of our plants has been naturally boosted and we are in excellent health! We will now work on the capacitors, and we are at the disposal of all the beautiful Souls to move forward together. We will soon be speaking about agriculture and the hope we have in this field so that – as Mr Keshe says – the cage will finally open and it will be the end of the reign of chemistry… Enjoy your evening!

For electricity we constantly paid between 135 and 145 € every month. I connected the Magrav in March. After the first month, the electricity bill was almost no lower. In the second month, it was only 89 € (64%). I thought there may be many reasons that the bill for a single month was lower. The third month held a surprise: the bill was 67 € (48%)! This is now no longer a coincidence, I attribute the savings to the Magrav. Now, I cannot wait for the next bill…
I put the Magrav in the kitchen. I connected the fridge and the TV to it. See the picture.
I bought the components in a kit from Society Blue planet (www.dva.si). The Blue planet employees also advised and assisted me in the assembly of the Magrav.

The laptop is an Asus double core. The batteries were dead (it had to be plugged into a wall outlet all the time) and the cooling system did not work anymore.

Gianni treated a used laptop one year ago with GaNS; he took the fans out and ‘replaced’ them with GaNS dots; he put GaNS on round cosmetic swabs as well on the batteries; he applied very thin nano coated copper foils salvaged from old batteries. The batteries work again and the laptop doesn’t heat up anymore.

For about one year the Keshe Plasma Generator build in Dietmar Gaertner workshop (1000 thanks again) powers the whole electric grid of Nottoli.

About 6 weeks ago I put a second one in series which powers our house (second photo).

The last 3 months we used remarkably less electricity. Especially November says a lot because our consuming behaviour was very similar to 2017. We used 54 % less, instead of 3.5 kilowatt hours average only 1.6 kilowatt hours per day.

For us much more important than the savings are the positive side effects. Incredible!

Anybody interested can see it for himself at our place 🙂

Home Universal Magravs Testimonial: November 2016 – Keshe Foundation Distributor (location Greece)
Our first 3 phase installation, at a retail store, is reporting a 38% savings on the actual electrical invoice on the second month.
A small supermarket, approximately 200 square feet, with 6 freezers, is reporting a 30% saving after one month of installing a single phase Magravs universal home unit. A supermarket, 900 square feet, with 8 freezers, is reporting a 38.90% savings after 45 days. We are now selling 4 Magravs per week….

When i made my first Magrav, i had no reducing till after months. I helped Pim to finish her Magrav and at that moment my electricity bill went down… then every time i helped somebody in our group to make their Magrav i saw it further going down. I’m now on around 35% of reduction… i think this is no coincidence and is it like M.Keshe and you always say ‘the more you give the more you gonna receive to give more…’; so maybe we gonna have our generator when we keep giving more…?» 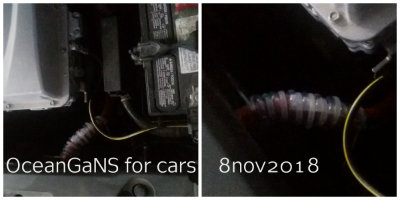 After the successful results of the OceanGaNS for cars on our electrical scooter, we decided to install the same on our electrical car : Nissan Leaf 2013. Meanwhile we have also modified the setup to be able to create a plasma field with strength differential : one tube is filled with LP-oceangans+GaNS (100%) and a smaller diameter tube is filled with the same LP at a concentration of 0.5%; this gives us a proportion of 1:200. Both the tubes are installed on the power line between the charging connection and the battery under the hood.

We will keep you posted on the results and observations. 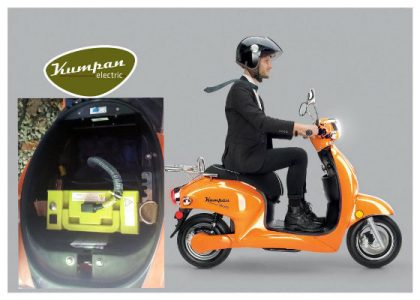 We have a Kumpan electric scooter. Today I transferred it to the shed where it can sleep during winter. As i took the battery out, i routinely check the charge of it and it read : 90%.

Here’s the story. In summer we installed a OceanGaNS for Cars Kit on the scooter, around the cable leading to and from the battery. During all the time we still had to charge the battery but we had the feeling that the charging times were getting less. And 5 days ago I went for a ride to my volunteer job (10km) with a full battery. When I returned home the charge read 80%. I did not charge it. Two days later i went again for the same trip; and when i came back home the charge was still 80% and, again, I did not charge it. And today the charge read 90%! This means that the OceanGaNS charges the battery slowly but surely! 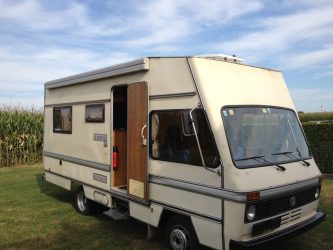 MaGrav in the car, -small update: I wrote about the incredible effects of a MaGrav in my motorhome (built 1980) a good 2 years ago (significantly quieter, more horsepower, lighter steering, less fuel consumption, etc.). After about a 3/4 year the effects became noticeably less. Unfortunately, the nanocoating did not have the quality at that time (my first series with hot-dip coating). Now shortly before our vacation I finally managed to install a MaGrav again. Immediately the engine ran quieter again with a little more horsepower. Most noticeable was the oil consumption: last year I had to top up 1 litre of oil on 1000-1500km, now after 2000km, overloaded, with a lot of gradients I did not refill anything and after oil level it was about 200ml less. Diesel consumption decreased by about 20%…

The limit on the Magravs Power Unit says 2kW but I need more capacity. How do I do this?

Answer : The 2kW limit refers to resistive loads such as heaters, hairdryers, motors with brushes, battery chargers, etc. The non-resistive load is theoretically unlimited, but we recommend following the rating of your household circuit. Should you need more resistive capacity, a cascading unit will soon be available; stay tuned.

How would I know that the Magravs Power Unit is working correctly?

Answer : Electrically speaking, the Magravs Power Unit is an insulator. It measures very high resistance so is a barrier to electric flow. Devices attached to the unit still function despite this very high resistance in the circuit. Monitor your electric meter – you should see it slow down over time, and almost come to a stop.

A tubing filled with GaNS-seawater has been installed spiraling around the gas and the air intake of the motor. With an older car the fuel economy went down by 40%.

In another experience with a new Audi car that has an on-board computer which normally injects more gasoline if economy gets to high. The guy was inexperienced with GaNS making and he didn’t wash the nano-plates to make the GaNS, nor did he wash the GaNS: so his GaNS contained caustic and salt. He reached 70% improvement with his gasoline consumption.

Home Universal Magravs Testimonial: November 2016 – Keshe Foundation Distributor (location Greece)
Our first 3 phase installation, at a retail store, is reporting a 38% savings on the actual electrical invoice on the second month.
A small supermarket, approximately 200 square feet, with 6 freezers, is reporting a 30% saving after one month of installing a single phase Magravs universal home unit. A supermarket, 900 square feet, with 8 freezers, is reporting a 38.90% savings after 45 days. We are now selling 4 Magravs per week….